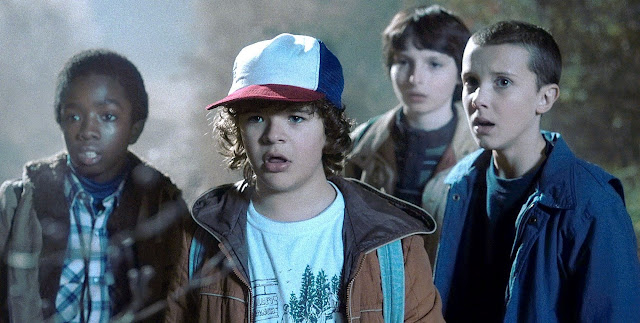 On November 6, 1983 in the town of Hawkins, Indiana, 12-year-old Will Byers vanishes mysteriously. Will's frantic mother, Joyce, searches for him while Police Chief Jim Hopper launches his own investigation. Will's friends Dustin, Mike, and Lucas discover a psychokinetic girl who claims to know Will's location. As they uncover the truth, a sinister government agency tries to cover it up, while a more insidious force lurks below the surface.

It's one thing to set a TV series in the 1980s; it's a whole other thing, however, to make it feel like it was actually shot during the Reagan-and-Rubik's-Cube era. Matt and Ross Duffer's new Netflix series Stranger Things is full of nostalgic nods to the decade and its pop-cultural products, but it's also uncommonly rigorous about getting the details just right — whether it's the many pitch-perfect music cues, the hat-tipping nods and homages to Eighties movies, or simply nailing the cringeworthy fashion statements of the day (those Mom jeans!). [Sam Adams, Rolling Stone]