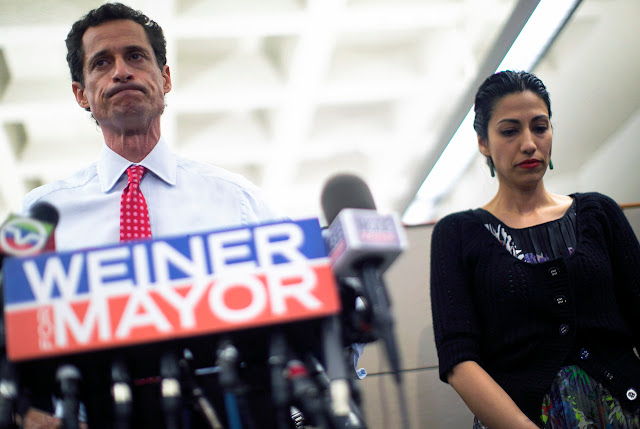 Serving seven consecutive terms, Anthony Weiner, good friends with and political allies to the Clintons, was once a highly respected member of Congress from New York City, he seen as a man sticking up for the every day person. That all changed in June, 2011 when he was forced to resign in disgrace after admitting that he did tweet lewd "headless" photos of himself from his public Twitter account to women he met online, and that it was not the work of a hacker or that the photos were of someone else. At the time, his wife Huma Abedin, herself a key aide to Hillary Clinton, was pregnant with their first child, she who decided to stand by her man. Two years later with Abedin still by his side, Weiner tries to resurrect his political career in a run for New York City mayor. He realizes that he has an uphill battle not only because of the known previously tweeted photos, but that there are other lewd photos from that era that may also come to light during the campaign. Regardless of the ... [Imdb]

The dizzying rush of Weiner is that the phenomenon it captures — a political culture in which candidates are round-the-clock addicts of image control — becomes, by the end, a powerful premonition of the current presidential campaign. The achievement of Weiner is that the movie shows us what that looks like — and the crushing toll it takes not just on democracy, but on reality.
[Owen Gleiberman, Variety]

Weiner uses sharp insight and untrammeled access to offer a portrait of a political and personal collapse that's as queasy as it is undeniably compelling.