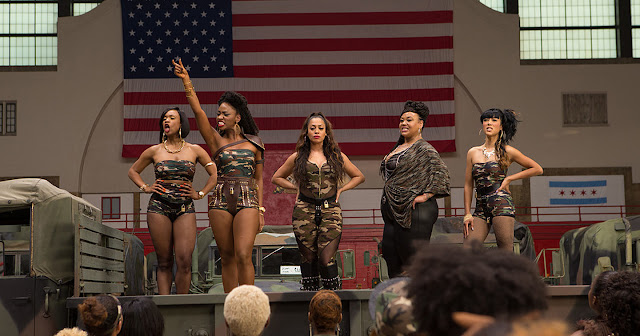 Beautiful LYSISTRATA (Teyonah Parris) is in love with aspiring Rapper DEMTRIUS “CHI-RAQ” DUPREE (Nick Cannon), but she is disturbed by the bloody war between his Spartan gang and the rival Trojans, led by CYCLOPS (Wesley Snipes).  After Trojans set fire to her apartment while she’s in bed with Chi-Raq (pronounced Shy-RACK), Lysistrata moves in with her neighbor MISS HELEN (Angela Bassett), a book-loving Peace activist who lost her daughter years before to a stray bullet.

When Patti, an 11-year-old neighborhood girl, is accidentally killed in a drive-by shooting, her grieving mother IRENE (Jennifer Hudson) pleads with anyone who witnessed the crime to come forward. But even after a reward is offered by a local Church congregation led by fiery anti-gun-violence activist FR. MIKE CORRIDAN (John Cusack), no one is willing to identify the killer.
Shaken by Patti’s death and desperate to do something to stop the escalating bloodshed, Lysistrata persuades Spartan and Trojan women to swear off sex with their men until the fighting stops. To draw more attention to their cause, she leads the women in a bold occupation of a local armory, inspiring women across the city—and eventually the world—to join the boycott. As the ultimate battle of the sexes rages on, the city’s fate hangs in the balance in this searing satire of gun violence in America.

It may not take much to make Spike Lee angry, but there’s no denying he gives us his reasons and then some in “Chi-Raq,” a sprawling, blistering state-of-the-union address that presents Chicago’s South Side as a cesspool of black-on-black violence, gang warfare, gun worship and macho misogyny, ruled by unbreakable cycles of poverty and oppression. All that social outrage clearly demanded similarly outsized treatment, and Lee and co-writer Kevin Willmott (“CSA: The Confederate States of America”) have found a remarkably accommodating vessel in Aristophanes’ “Lysistrata,” whose tale of an ancient Greek heroine leading an anti-war sex strike has been updated here as an alternately soulful and scalding, playful and deadly serious 21st-century oratorio. Blunt, didactic and stronger on conceptual audacity than dramatic coherence, this is still the most vital, lived-in work in some time from a filmmaker who has never shied away from speaking his mind or irritating his ideological foes, as he seems destined to do again with this attention-grabbing first feature to be released by Amazon Studios. (Justin Chang, Variety)