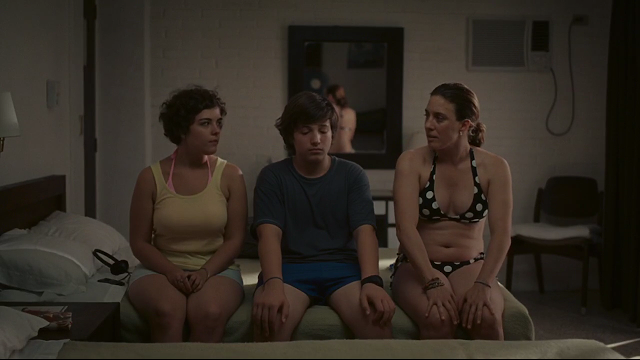 While vacationing at a beachside resort, a single mother faces inevitable separation anxiety when her 15-year-old son — who is also her best friend — discovers magical chemistry with a girl his own age. Director Fernando Eimbcke approaches the subject with sensitivity while also presenting it as a wonderfully awkward, laugh-out-loud comedy.

Thirty-five-year-old single mom Paloma (María Renée Prudencio) and her fifteen year- old son Hector (Lucio Giménez Cacho) are vacationing at a resort near the beach. These two are best friends, spending endless amounts of time together, bantering back and forth, and sharing intimate thoughts as they rub sunscreen on each other's backs. This delicate balance is upset when Hector meets Jazmin (Danae Reynaud), a girl his age who is staying at the same resort. The sexual chemistry between the two teenagers is palpable, and Paloma finds herself, slowly but surely, becoming the third wheel.

As with his first feature, Duck Season, which played the Festival in 2004, Eimbcke constructs his story carefully, bringing us into close contact with his characters and their complexities. The relationship between mother and son is precisely drawn. We see them hanging out in their hotel room watching television, or languidly soaking in the sun. Deliberately, Eimbcke offers us some hints on the changes that are creeping into their relationship through Hector's secret friendship with Jazmin, while a clueless Paloma fails to face the inevitable.

Laugh-out-loud funny and culminating in a pricelessly comical, and very awkward, game of truth or dare, Club Sandwich ruminates on the shifting circumstances of a mother who has to learn how to navigate life without the constant companionship of her only child. (Diana Sanchez, Tiff)