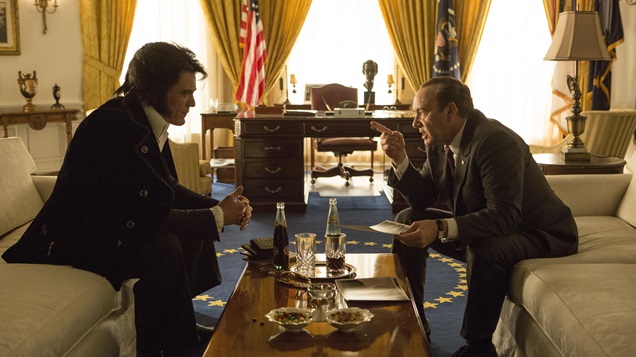 On a December morning in 1970, the King of Rock 'n Roll showed up on the lawn of the White House to request a meeting with the most powerful man in the world, President Nixon. Starring Academy Award® nominee Michael Shannon as Elvis Presley and two-time Academy Award® winner Kevin Spacey as Richard Nixon, comes the untold true story behind this revealing, yet humorous moment in the Oval Office forever immortalized in the most requested photograph in the National Archives. [Bleecker Street]

An infamous private meeting between ‘The King’ of rock and roll and the President of the United States serves as the inspiration for Elvis & Nixon, a cheeky, forgettable speculation about how the summit occurred and what was discussed. Divertingly daffy, this comedy-drama features a disarmingly off-kilter performance from Michael Shannon, who plays Elvis Presley as both tragic figure and irrepressible goof. But the movie’s irreverent, unassuming tone eventually starts to feel like a crutch: Elvis & Nixon is so superficial and cutesy that it proscribes greater emotional undercurrents. (Tim Grierson, Screen Daily)