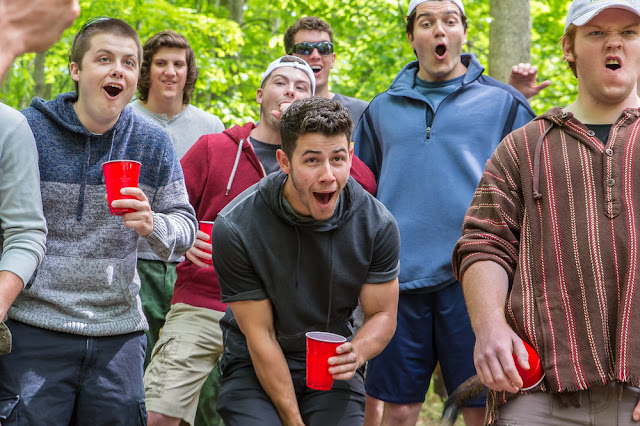 
Reeling from a terrifying assault over the summer, 19-year-old Brad Land (Ben Schnetzer) starts college determined to get his life back to normal. His brother, Brett (Nick Jonas), is already established on campus and with a fraternity that allures Brad with its promise of protection, popularity, and life-long friendships. Brad is desperate to belong but as he sets out to join the fraternity his brother exhibits reservations, a sentiment that threatens to divide them. As the pledging ritual moves into hell week, a rite that promises to usher these unproven boys into manhood, the stakes violently increase with a series of torturous and humiliating events. What occurs in the name of 'brotherhood' tests both boys and their relationship in brutal ways.


*************
Based on a true story, Andrew Neel’s powerful drama Goat opens on a striking image: a slow-motion medium shot of a group of bare-chested young men, bobbing up and down, mouths wide open in mid barbaric scream. Though surreal and lacking context, the disturbing shot is a brilliant encapsulation of Goat’s harrowing exploration of masculinity, both its extremes and the fragility that lies beneath it.
[Anthony Kaufman, Screen Daily]