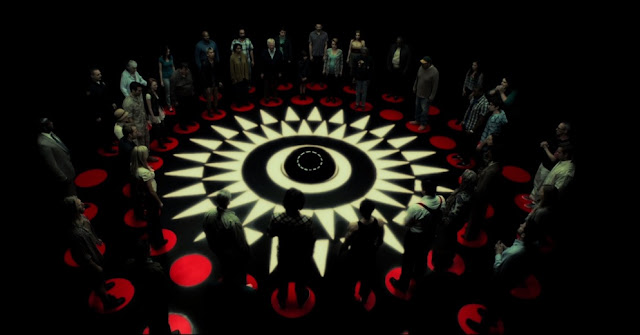 In a massive, mysterious chamber, fifty strangers awaken to find themselves trapped with no memory of how they got there. Every two minutes, one of them must die... Executed by an electrical pulse generated from a source within the chamber. At first the attacks seem random, but, soon the strangers realize that they, as a group, have the power to decide who will be the next to be killed: by the power of the vote. Mob mentality at its finest hour. A chance to control the machine. How will they choose who deserves to die? What happens when there's only one person left? "Circle" is a film about humanity. How we value one another and how people react when they are forced to make decisions under the worst possible circumstances. It's a film that speaks to the very core of what makes us human - Who we are, what we believe and ultimately, the lengths we will go to in which to save ourselves.