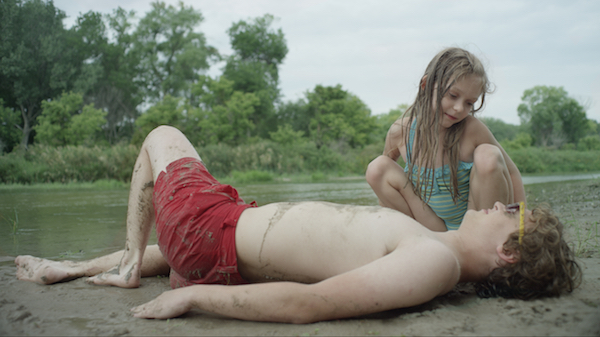 A Nebraskan family reunion couldn't seem more backwards to a gay Californian teenager. If Ryder had his way, he'd choose a moment just like this to come out, the bigger the scene the better. For his mother's sake however, Ryder agrees to keep quiet, save parading around the picnic in his most audacious pair of short-shorts. Ryder's antics raise dubious eyebrows from his hardened cowboy relatives, but 9-year-old Molly can't get enough. She follows her cool California cousin everywhere. After lunch, they walk to the barn to look for a bird's nest in the rafters. Their strange encounter, and whatever happened while the two escaped their family's watchful eyes, makes Ryder the sudden target of suspicion, and places him at the center of a long buried family secret. Anchored by a breakthrough performance by Logan Miller as Ryder and rich, dramatic turns by Robin Weigert and Josh Hamilton, TAKE ME TO THE RIVER constantly forces one to question any given character's culpability until the film's finale. The film, woven together by an omnipresent sense of dread, is the masterful debut from writer/director Matt Sobel.

First-time writer-director Matt Sobel’s “Take Me to the River” unfolds in an atmosphere of mystery and dread that contrasts with its surroundings’ bucolic serenity. A gay Californian teenager’s visit to Nebraskan relatives turns more nightmarish than he anticipated, for reasons that he never could have imagined, as clouds of displaced sexuality hover over flowing rivers, fertile fields and little girls on big horses. Told uniquely through the kid’s largely uncomprehending point of view, this Midwestern gothic tale maintains sufficient visual distance to suggest alternative narratives from other perspectives. The superlatively acted indie promises more than it delivers, but chillingly evokes sufficient primal dread to intrigue target auds. (Ronnie Scheib, Variety)