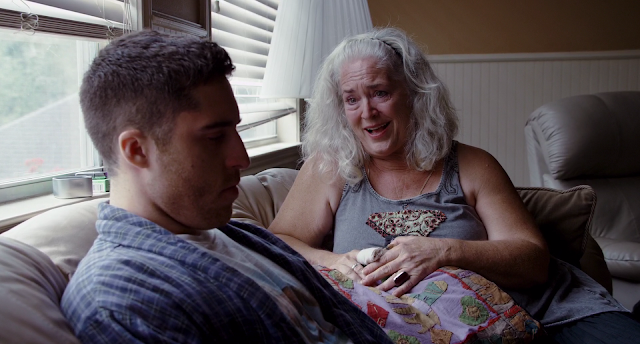 When Krisha shows up at her sister’s Texas home on Thanksgiving morning, her close and extended family greet her with a mixture of warmth and wariness. Almost immediately, a palpable unease permeates the air, one which only grows in force as Krisha gets to work cooking the turkey and trying to make up for lost time by catching up with her various relatives, chief among them her nephew, Trey. As Krisha’s attempts at reconciliation become increasingly rebuffed, tension and suspicion reach their peak, with long-buried secrets and deep-seated resentments coming to the fore as everyone becomes immersed in an emotionally charged familial reckoning.

How do you solve a problem like Krisha? A jittery character drama which mixes tones and influences, the feature debut of writer-director-editor Trey Edward Shults does a very good job of finding fresh emotional terrain in what is a very familiar setup: a Thanksgiving meal tormented by the family black sheep. Krisha is a little bit of Terrence Malick by way of John Cassavetes, with a dash of psychological horror thrown in for spice, but even when the filmmaking falters, Krisha Fairchild’s unsettlingly intense lead performance dominates the movie, leaving us feeling as captive as the character’s wary kin. [Tim Grierson, Screen Daily]