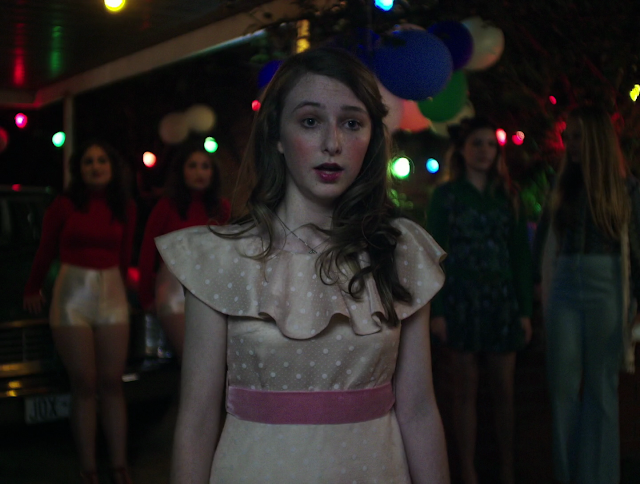 The world is closing in on Greta Driscoll. On the cusp of turning fifteen she can't bear to leave her childhood, it contains all the things that give her comfort in this incomprehensible new world. She floats in a bubble of loserdom with her only friend Elliott, until her parents throw her a surprise 15th birthday party and she's flung into a parallel place; a world that's weirdly erotic, a little bit violent and thoroughly ludicrous - only there can she find herself. Based on the critically acclaimed production by Windmill Theatre, GIRL ASLEEP is a journey into the absurd, scary and beautiful heart of the teenage mind. [Imdb]

The teenage coming-of-age genre has become so steeped in supernatural romance, dystopian action and gross-out gags that — on film, at least — the period of blossoming maturity it depicts has almost been stripped of its wonder. Stage-to-screen adaptation Girl Asleep offers an antidote to the current trend, wholeheartedly embracing the magic and mystery of growing up. After an enthusiastic premiere at the 2015 Adelaide Film Festival, where it won the audience award for most popular movie, the energetic, amusing and pointedly eccentric Australian effort debuts outside its homeland in Berlinale’s Generation 14plus program.
[Screen International, Sarah Ward]