aka Eye of the Storm 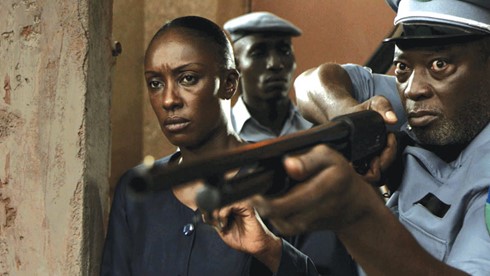 Based on case studies of former child soldiers, Sékou Traoré's feature finds a young lawyer, Emma Tou (Maimouna N'Diaye), reluctantly accepting to defend a recently captured fugitive in what her boss has dubbed "The Trial of the Century." Determined to ensure her defendant sees a fair trial amid the media circus, Emma visits the chilling Blackshouam Vila (brilliantly played by Fargass Assandé in a performance reminiscent of The Silence of the Lambs) and works to earn his trust to break his self-imposed silence. As Vila, no longer a child but grown into a grizzled man of middle age, begins to share his history, Emma uncovers the psychological terrors of a youth brainwashed to commit crimes who has grown into a man vacillating between celebrating his atrocities and complaining of his horrific nightmares, haunted by his unfortunate victims. The further Emma digs, the more she finds that implicates government officials in facilitating Vila's murderous rampage. Setting the stage for a showdown in court, Emma is locked in a complicated search for truth in which hero and villain are only shades of gray. Traoré's filmmaking affords his actors an incredible showcase, keeping the tech simple but ratcheting up the tension to its final chilling image. -siff