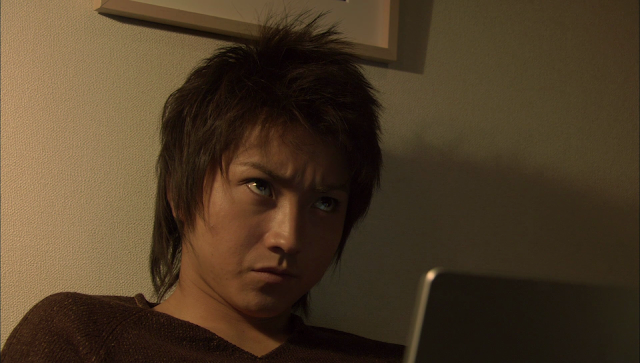 Released into Japanese theaters in 2006, director Shusuke Kaneko's stylish adaptation of the best selling manga quickly trampled The Da Vinci Code on Japanese screens and subsequently and set box office records in Hong Kong and all across Asia. The plot picks up as aimless law student Light Yagami (Tetsuya Fujiwara) discovers a mysterious notebook in the middle of the street. Soon thereafter, Light discovers that if he writes a name in the notebook, that person will instantly die (generally of a heart attack). Of course it doesn't take long for Light to realize the extraordinary power he now holds, and before long he hatches a plan to rid the planet of crime by scribbling the name of notorious criminals in the pages of the powerful notebook and make the world a safer place for decent citizens everywhere. But Light isn't alone in his mission, because his new companion Ryuk - a flying god of death who only Light can see and who also happens to be the true owner of the notebook - is always there to egg him on and get a little laugh from the criminal holocaust. Over the course of the next few weeks, Light does away with millions of nefarious baddies and the global crime rate drops by seventy percent. Still, the police aren't too happy that a regular civilian seems to be taking the law into his own hands. Perhaps the only person capable of discovering Light's true identity is L (Kenichi Matsuyama) - a brilliant teenage detective with a taste for sweets and remarkable deductive reasoning skills. When the police chief (Takeshi Kaga of the hit television series Iron Chef) - who also happens to be Light's father - is assigned the task of unmasking the elusive killer, things really start to get interesting. A fast paced, goth-infused, cat-and-mouse thriller, Death Note was followed at the box office by the equally successful sequel Death Note: The Last Name just a few short months later. -Jason Buchanan, Rovi