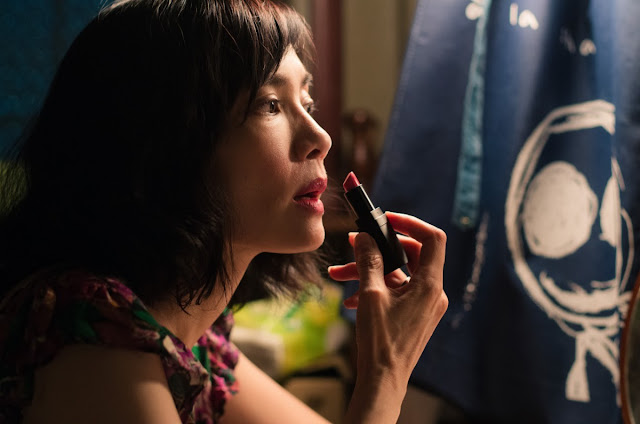 Ling (Chen), a Taiwanese woman in her forties has just lost her job in a garment factory. She spends most of her time taking care of her hospital-bound mother- in-law. Her absent husband, working in Mainland China, never returns her calls and her rebellious teenage daughter pays no attention to her. Frustrated and weary, Ling is unexpectedly diagnosed with early-onset menopause after noticing her periods have stopped. Desperate to escape her mundane life, she becomes aware of an injured man with bandaged eyes in the hospital bed opposite her mother-in-law. Her increasingly intimate interactions with this stranger promise to rekindle Ling's dormant desire, leading to a series of out-of-character episodes. Flashed with moments of black humour, EXIT is a genuine portrait of a woman trapped between two generations, struggling between tradition and modern society.

There's minimal dialogue throughout Exit's sombre saga of female alienation, with composition and mood articulating Ling's complicated surge of feelings, whilst the haunting murmur of a distant tango alludes to her mounting sexual desire. On top of this Hsiang's humid palette gives this claustrophobic portrait of urban living an airless quality, and as the narrative progresses the film becomes increasingly difficult to watch; like witnessing a mirage of a fragile life sliding silently through the cracks of society. Whilst themes of beauty, body image and sexual liberation fester like mildew, suffocating this stifling drama, Exit also aims to highlights China's tightening grip on Taiwan. A series of unanswered calls and the general absence of Ling's husband lingers menacingly in the background as a metaphor for China's rising economic prowess and subsequent disruptive effect on the fabric of Taiwan's working-class communities. However, it's ultimately Chen's nuanced and devastatingly poignant performance that lifts this slow burning study of gender inequality and female repression into a new stratosphere of filmmaking. (Patrick Gamble, CineVue)