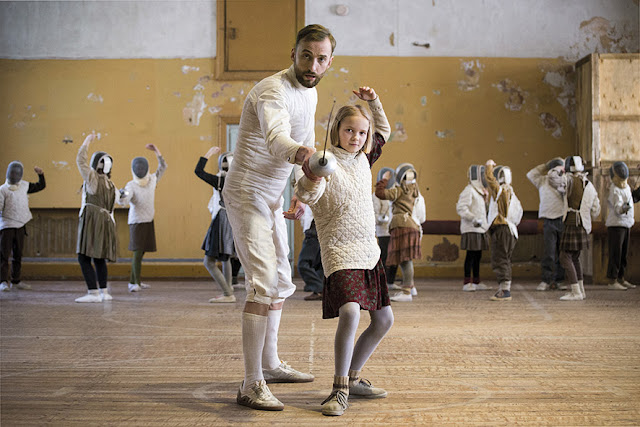 Fleeing from Stalin’s secret police, an ambitious young fencer finds himself teaching small town children in a godforsaken Estonian coastal village, only to realize that this is exactly what he wants to do in life. A young man, Endel Nelis, arrives in Haapsalu, Estonia, in the early 1950s. Having left Leningrad to escape the secret police, he finds work as a teacher and founds a sports club for his students. Endel becomes a father figure to his students and starts teaching them his great passion – fencing, which causes a conflict with the school’s principal. Envious, the principal starts investigating Endel’s background... Endel learns to love the children and looks after them; most are orphans as a result of the Russian occupation. Fencing becomes a form of self-expression for the children and Endel becomes a role model. The children want to participate in a national fencing tournament in Leningrad, and Endel must make a choice: risk everything to take the children to Leningrad or put his safety first and disappoint them. (Via thefencermovie.com)

Reading Anna Heinämaa’s script was a wonderfully surreal experience. The story begins with a quiet man teaching fencing to children – a promise of a good story. The script captivated me, and I kept waiting for the story to flatten, never imagining that it could hold that level of fascination. But the story kept its grip on me till the very end. It’s a story with everything a good film needs and a good number of challenges for a director. With all the elements a director could want, a wish entered my mind: Could I get to direct this film? THOUGHTS Director’s This exceptional story was a great foundation for the production and attracted the interest of financiers. The entire crew gave their all, working long days because the story had meaning for each and every one of them. Stories about encounters between children and adults have always interested me. Almost all of us can remember an adult whose presence or words at the right time in our childhood have inspired or given us the crucial nudge in the right direction, helping us to realize a dream or pursue our dream job. I had teachers who encouraged me to make films, and I don’t think I would be a director without them. The core theme of THE FENCER is the role of adults in children’s lives, how adults see children and their interests, and how adults can steer children in the right direction. It’s a question that fascinates and puzzles: how do people become who they are? I want to tell stories that tell the truth about life. (Klaus Härö)